Everything About Fiction You Never Wanted to Know.
(Redirected from Feminine Parasol)
Jump to navigation Jump to search 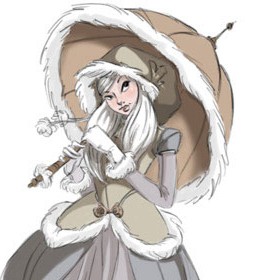 Even a winter princess's dress looks more feminine with one.

Any time a lady carries a parasol as a sign of high class grace and femininity, and sometimes as a sign of demureness and innocence.

The parasol (a compound word of Spanish origin meaning "to stop/block the sun") has been used in cultures all over the world for at least 2,000 years, from Egypt to Greece to China, before making its way to Europe and the United States in the 18th century. This trope basically kicked in during the 19th century, when it was almost always proper for a well-to-do lady to carry one to keep from getting sunburns on her delicate skin, whereas poor woman had to grub in the fields. Now that having a suntan isn't seen as so gauche anymore, it's just symbolic of the lady having aforementioned traits.

Of course this means the trope is prevalent in The Gay Nineties, and Southern Belles. And also of course, this can set off Real Women Never Wear Dresses.

Despite this, it can still overlap with Parasol Parachute, Parasol of Pain, Kicking Ass in All Her Finery.

Examples of Parasol of Prettiness include: