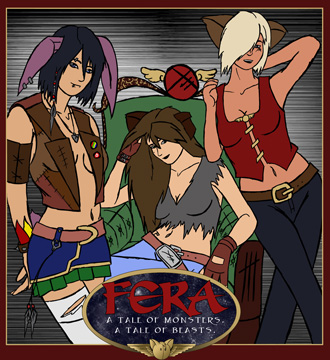 Fera is a fantasy Web Comic created by Davy Shirley, better known by his pen name, t_iii. It is a Fantasy and Adventure comic with technology inspired by Steampunk, as well as LGBT romance. The stories primary focus is on a small band of would-be heroes who set out to uncover the truth behind recent attacks on their home town, their relationships, ethnic tensions and adventures along the way.

Though not a true Furry Comic, Fera does include Catgirl type characters, as well as a number of other humanoids that fit into the anthropomorphic category.

Tropes used in Fera include:
Retrieved from "https://allthetropes.org/w/index.php?title=Fera&oldid=1734750"
Categories: