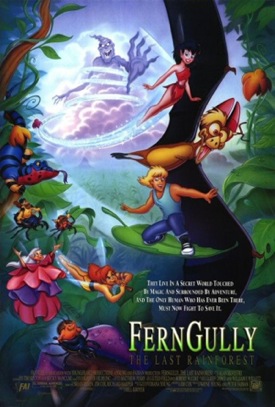 If there were a Holy Trinity of Anvilicious children's animation of the early '90s, it would consist of Captain Planet and the Planeteers, Cartoon All-Stars to the Rescue... and Ferngully: The Last Rainforest.

FernGully, or to go by its full title, FernGully: The Last Rainforest, is a 1992 animated feature from 20th Century Fox, and is based on the children's book of the same title, written by Diana Young. It takes place in an Australian rainforest (though, strangely, none of the humans have an Australian accent). Within is the titular Magical Land, "FernGully", which is inhabited by a wide variety of Fairy Creatures. They are led by the wise Magi Lune, who is currently teaching her young protege, Crysta, the secrets of the forest. Here, Fairies believe that humans are extinct, having been last seen fleeing an attack by the spirit of destruction, Hexxus. But venturing outside FernGully, Crysta accidentally discovers a human logging operation. After meeting an insane fruit bat named Batty Koda (voiced by Robin Williams), and accidentally shrinking one of the humans, Zak, down to her size, Crysta has to face the accidentally released Hexxus (voiced by Tim Curry), who lives off pollution and threatens to destroy the forest.

FernGully did mediocre business at the box office, at least in comparison to that other animated film featuring Robin Williams that was released in 1992.

Like most other animated films of this time period that had any kind of success, FernGully spawned one very cheap direct-to-video sequel. That and the fact that it includes a song entitled "We're Having Funner Than The Funnest Fun" tells you everything you'd ever need to know about it...

Tropes used in FernGully: The Last Rainforest include:

Batty: Nobody cares about me.
Zak: I do, Bat-Man!
Batty: You sure?
Zak: I'm positive.
Batty: Only fools are positive.
Zak: Are you sure?
Batty: I'm positive!... I fell for it! I should have known!

Batty: (watching a headlight falling towards him) Oh, this is gonna hurt...