Everything About Fiction You Never Wanted to Know.
(Redirected from Ferris Bueller's Day Off (Film))
Jump to navigation Jump to search 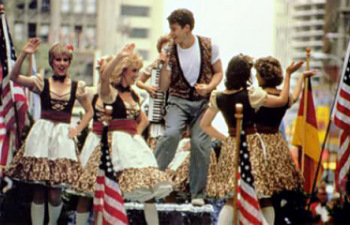 "Life moves pretty fast. If you don't stop and look around once in a while, you could miss it"
—Ferris Bueller

Ferris Bueller's Day Off is a 1986 teen comedy movie written and directed by the legendary John Hughes. It's considered one of the best films of the eighties, and has been very influential.

The film follows Ferris Bueller (Matthew Broderick), a senior in high school, who pretends to be sick and skips school for the day. He's able to convince his neurotic best friend Cameron and his carefree girlfriend Sloane to come along with him. The three of them take Cameron's father's prized car, heading out to Chicago to spend one more day together before graduation. However, his principal and his younger sister are hot on his trail, ready to prove that he's skipping school.

In 1990, a TV series based on the film began to air on NBC. Due to poor ratings, it was cancelled during its first season. Dueling show Parker Lewis Can't Lose was its Spiritual Successor (and some say was the real TV adaptation).

The movie was named to the National Film Registry in 2014. It also happens to be movie critic Richard Roeper's favorite film.

Tropes used in Ferris Bueller's Day Off include:

I heard that you were feeling ill
Headache, fever and a chill
I've come to help restore your pluck
Cause I'm the nurse who likes to [door slams]

Jeannie: Do you know anything? [hangs up phone]

Cameron: It is his love... It is his passion...
Ferris: It is his fault he didn't lock the garage.