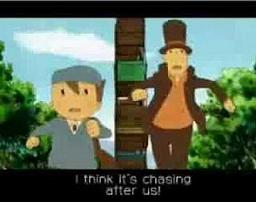 Few rides are as prone to breakage in superhero movies and shows as the Ferris Wheel. When the hero shows up, the wheel typically begins to shudder and collapse, dropping children and sometimes falling completely over. A common variant is to have the Ferris Wheel rip loose from its hub and roll away.

A Ferris Wheel is the most useful ride for TV and movies because it is both big and tall (a hero saving people from a spinning teacup ride gone amok isn't impressive) and slow (If a rollercoaster doing a hundred miles an hour leaves the tracks it boggles the mind that any hero but a Super Speedster could find a convenient phone booth, change, and return in time to do anything but help gather up the dead). Ferris Wheels are also large open structures with a lot of rods and beams that let athletic types show their stuff. Having a hero in the area thus generally causes any Ferris Wheel to suffer a sudden massive breakdown.

It should be noted that if a Ferris wheel did break off and roll away, it wouldn't get very far. The wheel itself isn't very structurally sound, and would collapse under its own weight.

Examples of Ferris Wheel of Doom include: