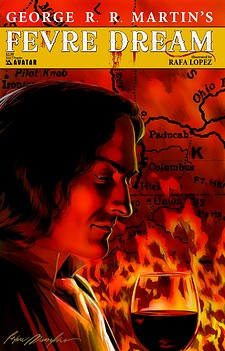 Cover art from the Comic Book Adaptation by Felipe Massafera.

Fevre Dream is an early book by George R. R. Martin, the author of the A Song of Ice and Fire series. It tells the story of Abner Marsh, the owner of a small steamboat company in 1857. He's approached by a mysterious stranger named Joshua York, who wants to go into a partnership with him in creating the greatest steamboat on the Mississippi River.

York and his friends are pale, never go out during the day, and drink a strange and horrible-tasting liquor constantly. In the initial run of the steamship, the titular Fevre Dream, York holds up the schedule with mysterious several-day errands, frustrating and raising the suspicions of Marsh. Eventually it is revealed that York and his companions are vampires, but ones that have conquered their species' need to feed on humans, and are now looking for other vampires still enslaved by the "red thirst".

Once they get to New Orleans, York and Marsh have to contend with Damon Julian, an ancient and powerful vampire who opposes York's plans and draws several parallels between the vampire/human interrelationship and the racism present in the deep South at the time. For a vampire book, it is refreshingly absent of the kind of angst often associated with the genre. Also, the author spent a lot of time researching historical details to realistically capture the world of Mississippi River steamboats in the pre-Civil War era.

Tropes used in Fevre Dream include:
Retrieved from "https://allthetropes.org/w/index.php?title=Fevre_Dream&oldid=1260045"
Categories: