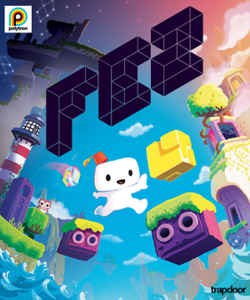 Fez is a 2012 Xbox Live Arcade puzzle platformer by indie game designer Phil Fish, 5 years in development. The game has players control Gomez, a small white... thing who lives happily in his peaceful, floating 2D village until he comes across a magical fez which reveals a shocking truth to him: the world is actually 3-Dimensional. The fez allows him to perceive the 3D world and shift dimensions, but he can still only move across 2D planes. Using this newfound ability, he sets off to collect several pieces of a giant magical cube that has been scattered all over the land, causing the fabric of reality to tear apart.

Tropes used in Fez include:
Retrieved from "https://allthetropes.org/w/index.php?title=Fez&oldid=1700675"
Categories: