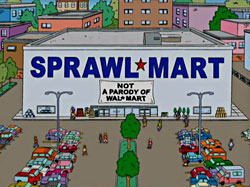 When a real-life institution is to be featured prominently in a series, it will be replaced by a fictional stand-in. This is done in part to avoid licensing issues, but also to avoid the problems inherent in twisting the institution to fit the specific needs of the show.

While this gives the writers the liberty to make necessary changes to the real-life institution, it does run the risk of giving the viewers an unintentional laugh. (Or occasionally an intentional one, as when the fictional version is used to provide a Take That to the real-world counterpart).

A subtrope of Brand X. For fake products that are transparent copies of real ones, but with a letter or two switched around, it's Bland-Name Product.

Examples of Fictional Counterpart include:

Retrieved from "https://allthetropes.org/w/index.php?title=Fictional_Counterpart&oldid=1695675"
Categories:
Cookies help us deliver our services. By using our services, you agree to our use of cookies.