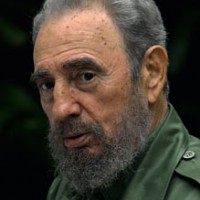 "I began revolution with 82 men. If I had to do it again, I would do it with 10 or 15 and absolute faith. It does not matter how small you are if you have faith and plan of action."
—Fidel Castro

Born in 1926 to a sugar plantation owner, Fidel Castro involved himself in revolutionary politics during his days as a law student in Havana. He participated in the attempt to overthrow the Dominican dictator Rafael Trujillo in 1947, as well as the first, unsuccessful attempt to overthrow Fulgencio Batista, the American-backed dictator of Cuba. He then fled to Mexico, where he met Che Guevara and together they led an uprising against Batista, finally managing to topple him in 1959.

Castro set up a Communist regime with himself as the Glorious Leader, transformed Cuba into a one party communist state and ruled the country as dictator until 2008, when he officially stepped down due to ill health. He was succeeded by his brother, Raul.

The CIA tried in various ways to get rid of Castro, including multiple assassination attempts, the Bay of Pigs Invasion on 1961, and an economic embargo since 1962 (this is still in effect). Castro was also excommunicated by Pope John XXIII, but he didn't care.

Through the Cold War, Cuba relied on Soviet support, and when that was cut off Cuba faced a major economic crisis (mostly due to a lack of oil). Still, Castro managed to overcome these difficulties through a rigorous re-structuring of the country's economy. Cuba is now a major tourist destination for non-Americans (Americans are forbidden to go to the island by the US government) and much of its economy is based around tourism.

Although Cuba remains a poor country with very limited political and economic freedom, Castro's regime has done much to improve public education, sports and particularly public health. Cuba still exports doctors to many Latino-American countries and has an average life expectancy on par with your average first world country. On the other hand, a lot of basic living commodities are rationed, many buildings are in a poor state of repair and the human rights record of the government is poor (though it has slowly improved over the years). The country does have a good rating on the sustainable development index, though this likely has more to do with the poverty than conscious government policy (i.e. they waste little resources because many things are in short supply, and their living standards are low so they don't consume much anyway).

Not as much is known about Castro's personal life, but one of Castro's biographers described the Cuban as being "fiercely hard-working, dedicated, loyal... generous and magnanimous" but also noted that he could be "vindictive and unforgiving" at times. He went on to note that Castro "always had a keen sense of humor and could laugh at himself" but could equally be "a bad loser" who would act with "ferocious rage if he thought that he was being humiliated."

He's known as a cigar fan, but stopped smoking them on the advice of his doctors in 1985.

Castro is the author of several political books, most of them dealing—as you'd expect—with his problems with capitalism and American foreign policy.

Since Castro is a controversial figure, with many fans and detractors, please use the Rule of Cautious Editing Judgment when editing this page.