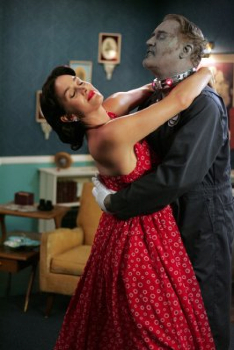 Fido is a 2006 comedy film directed by Andrew Currie and produced by Lions Gate Entertainment.

In an Alternate History version of the 1950s, cosmic radiation has initiated a Zombie Apocalypse. And while the bulk of the infestation has been dealt with, the lingering radiation means that anyone that dies eventually rises again as a zombie. To help maintain order, a company called Zomcom comes into power, fencing in safe communities from the heavily infested "Wild Zone", and develops a containment device to curb the remaining zombie's flesh-eating urges. With the device in place, the zombies provide a cheap source of manual labor (but if the collar is ever switched off...)

The story begins when status-conscious homemaker Helen Robinson purchases a zombie in order to save face in front of new neighbors the Bottoms, of whom Johnathan works as chief of security for Zomcom. This causes friction with her husband Bill, who hates zombies as a result of his experiences in the Zombie Wars, but son Timmy-who happens to be something of an outcast at school-quickly befriends their new acquisition, whom he names "Fido."

All goes well until a mishap with Fido's collar causes him to attack and kills the Robinson's neighbor, Mrs. Henderson; Timmy manages to re-kill her and dispose of her body, but not in time to prevent the deaths and reanimation of several other people in the neighborhood. Now Timmy must try to keep Fido's actions under wraps while dealing with increasing scrutiny by Zomcom and growing friction between his parents.

The film has received generally positive reviews (Rotten Tomatoes currently has it at a 71% "Certified Fresh" rating) and provides a good mix of humor, violence, and Shout Outs to various aspects of zombie culture.

Tropes used in Fido include: