Fields of the Nephilim

Everything About Fiction You Never Wanted to Know.
Jump to navigation Jump to search
/wiki/Fields of the Nephilimcreator 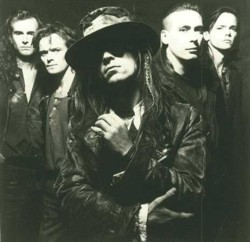 Fields of the Nephilim

"Let it spill from my mouth, sweet nectar for a thousand young..."
—Fields of the Nephilim, "Psychonaut"

Fields of the Nephilim are an English Goth Rock band formed in the early '80s by lead singer Carl McCoy, saxaphonist Gary Whisker, bassist Tony Petitt, guitarist Paul Wright, and drummer Alexander "Nod" Wright. While they never achieved mainstream success, they have a devoted following and have been highly influential on artists within the Goth Rock and Gothic Metal genres. Their last album, Mourning Sun, was released in 2005 with a completely new line-up. They seldom tour these days, mostly playing one-off shows and festivals in Europe.

Fields of the Nephilim provides examples of the following tropes:
Retrieved from "https://allthetropes.org/w/index.php?title=Fields_of_the_Nephilim&oldid=1536564"
Categories: