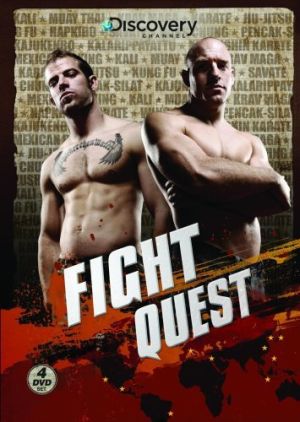 Doug's on the left, Jimmy's on the right


(Country of the week) is just one stop in our journey as we explore the world's most dangerous fighting arts. This is our Fight Quest.
—Episode intro

Fight Quest was a reality show previously aired on the Discovery Channel, and chronicled the travels of Doug Anderson and Jimmy Smith as they studied different martial arts, culminating in a final challenge that summed up the basics of that art. Unlike its counterpart on The History Channel, Human Weapon, Fight Quest dealt less with the technical aspects of the art's techniques and more with the culture, mindset, and overall strategy behind each art. It also delved a fair bit into Doug and Jimmy's reactions to each.

Tropes used in Fight Quest include:
Retrieved from "https://allthetropes.org/w/index.php?title=Fight_Quest&oldid=1513796"
Categories: