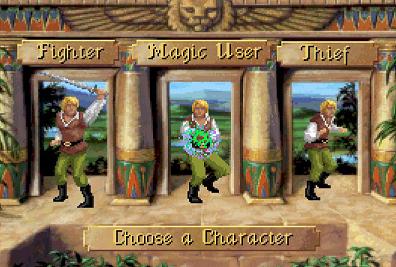 Whichever you choose, you know you'll regret it later.

Ah, the RPG. The game genre that offers the player a mighty wealth of character choices. When you think about it, however, most Western RPGs offer three major choices of character specialization:

Likely, there will be builds that allow the player to mix and match elements of the three paths, but usually, it boils down to strength, stealth, and sorcery.

This trend stretches back to the grandpappy of all RPGs, Dungeons & Dragons. First edition offered players three main character classes: Fighter (actually called the Fighting Man at first), Thief, and Magic User (it also featured Clerics who healed the party, but modern games prefer to use abundant healing items). As a result, a lot of RPGs have typically followed in their footsteps. However, the trope is even older, dating back to Tolkien's The Hobbit, one of the inspirations for D&D. Consider the class breakdown of the party heading to the Lonely Mountain: a dozen fighters, one wizard, and one "burglar".

See also An Adventurer Is You for a breakdown of the party-based RPG (especially the MMORPG). See also, Action Hero, Science Hero, and Guile Hero.

Examples of Fighter, Mage, Thief include:

Retrieved from "https://allthetropes.org/w/index.php?title=Fighter,_Mage,_Thief&oldid=1835629"
Categories:
Cookies help us deliver our services. By using our services, you agree to our use of cookies.