Fighter in The Wind 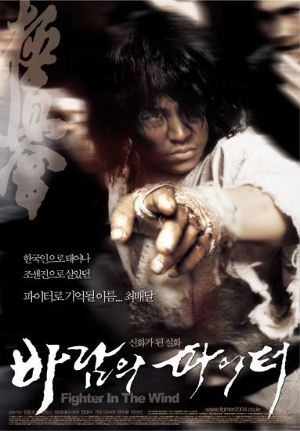 A film about the early life of the man who would eventually become the legendary karateka, Mas Oyama.

A young Korean boxer, Choi Bae-dal, is tricked by Japanese propaganda into applying to join the Japanese air force. Upon getting to Japan, he finds that, as a Korean, he will be treated as a prisoner and forced to fly a kamikaze mission - unless he can win his freedom in hand-to-hand combat against the Japanese General Kato. He loses, but to the Japanese soldiers' surprise, actually manages to make the general bleed, right before an American air raid disrupts everything and happens to set the prisoners free.

In post-war Japan, Bae-dal finds work, but has violent clashes with the local Yakuza branch, being saved by the chance arrival of an old family friend, Bum-soo. A rickshaw driver by day, at night he commits acts of vigilante violence against American soldiers who rape Japanese women or otherwise brutalise the locals. Between these two activities he meets Yoko, and the two eventually develop a relationship. Bae-dal also makes some more friends in the local Korean community after being introduced by Bum-soo.

Unfortunately, the Yakuza aren't willing to let the Koreans live peacefully. They storm the circus where most of the Koreans live, and kill Bae-dal's old friend and mentor. A gang war on the streets ensues, but achieves little for the Koreans. After this, Bae-dal resolves to train himself to become the most invincible martial artist in Japan, and retreats to the mountains for a training sequence.

When his training is over, he returns to civilization and begins dojo-breaking - entering every Karate (and other martial arts) school he finds, and defeating the masters, and any of the students willing to face him. When the head of the Japan Karate Association - his old enemy Kato - hears that a Korean dares to fight - and beat! - Japanese martial artists, something must be done. The Association decides to send their best fighter, Kato's former lieutenant Ryoma, to kill Bae-dal, who is now using the name Masutatsu Oyama. Oyama just barely manages to survive the fight, killing Ryoma, and is arrested the next morning, but released when it becomes obvious that he acted in self-defence.

When it turns out Ryoma had a wife and son who are now left without his support, Oyama is consumed with guilt, and travels to their home to seek forgiveness by working for them in any way he can. Eventually, he bonds with the son and persuades the widow that he really is a good man (a better man than Ryoma, too), and they encourage him to return to fighting. The Japan Karate Association respond to his comeback by attacking his friends and family, so he demands a final showdown against Kato's own karate school to settle things. In the final battle against Kato himself, Oyama wins, but shows the already-defeated Kato mercy by refusing to throw the final (probably fatal) punch to Kato's face, winning his respect at the same time as establishing himself as the best fighter in Japan.

An epilogue shows him continuing to find new challenges, closing on the shot of him taking on a charging bull with only his bare hands.

Tropes used in Fighter in The Wind include:
Retrieved from "https://allthetropes.org/w/index.php?title=Fighter_in_The_Wind&oldid=1513396"
Categories: