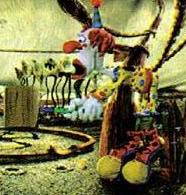 This is not the Joke Character, as those are characters that are purposefully bad, nor is it the Lethal Joke Character, which is when a Joke Character ultimately has some hidden utility. This is simply a character that just looks and acts silly without being a bad character. They may look wacky, have cartoonish attacks, and a goofy voice, but otherwise they play as well as any other fighter.

If a game runs on Rule of Cool, this guys run on Rule of Funny. Basically, fighting clowns are those fighting game characters that stand out from the roster because they're sillier than the rest of the cast without being a Joke Character. Look for them in any fighting game, you'll usually find at least one character that stands out due to this (unless the role of the game's silly character is already filled by the Joke Character).

Many a fighting clown uses Confusion Fu as his/her/its fighting style and/or is an Improbable Weapon User.

Examples of Fighting Clown include:
Retrieved from "https://allthetropes.org/w/index.php?title=Fighting_Clown&oldid=1580704"
Categories: