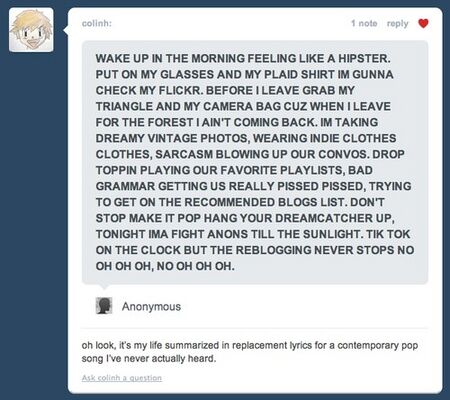 Yeah, that was a thing at the time...

Self-demonstration aside, "filk" is best described as the music of fandom, or at least, the music of the filk community. Songs about SF books or movies, fandom in-jokes, or even just related topics such as computer geeky references are all common sources for filk. And, despite what the self-demonstration says, filk doesn't have to be new words to old music - that's To the Tune Of. (Nobody would call The Star-Spangled Banner filk, but the US national anthem uses the tune of To Anacreon in Heaven. The song sometimes considered the "anthem of filk," Hope Eyrie, has its own original music.)

The term is believed to have originated in the 1960s in an early SF fandom 'zine, where the editor didn't do enough copy editing, and typoed "Folk Music" as "Filk Music". The term stuck as a way to describe the peculiar style of musicianship, weird humor, and camaraderie of fandom musicians. (Some in the Society for Creative Anachronism claim it was actually their word first, and fandom got it from them; given the heavy overlap between SCAdians and fandom both then and now, it's probably a moot point.)

Filk has a few general styles: humorous, serious but positive, and depressing and angsty. The humor is often, but not always, parody (here defined broadly as "new lyrics," not only the ones referencing the originals —- see Satire, Parody, Pastiche) -- some filkers are specifically parodists, some do both parody and original, and many only do original work. Some even specialize in "refilking," parodying others' original filk songs.

Parody filk is sometimes seen on Fanfic sites as an exclusively literary form—lyrics parodying a popular song, but not necessarily meant to be sung (and sometimes taking such liberties with the meter that it cannot be sung to the specified tune).

The angsty stuff is called "ose," as in, "it's ose, ose, and more-ose." Of course, like all things, especially fandom, there can be some overlap—there are terms such as "cheeri-ose," which is both cheery and depressing; "sucr-ose," sweet and sugary and depressing, and "verb-ose," long and drawn out...and depressing.

(Oh, and in case it isn't apparent already, a lot of filk songs have puns. Lots of puns.)

Most SF conventions nowadays have a room set aside for the filkers to sing in large bardic-style circles once the main panels end for the day—some even have concerts. Filk-specific conventions do exist, the biggest being the Ohio Valley Filk Fest, which includes the annual Pegasus Awards for best filk songs. Check it out for some examples of particularly well-regarded filk. For more examples of filk, there's also The Virtual Filksing, which bills itself as the oldest anthology of recorded filk music on the Internet.

Unfortunately, defining filk more concretely than "the music of fandom, or at least, the music of the filk community" can be tricky; even in fandom circles, filk is sort of a Redheaded Stepchild that a lot of people don't like. That's probably because they've been exposed to one too many bad singers—filk has a performance aspect, and mangled music can put you off of the entire field. And Sturgeon's Law still applies, after all—it's just that, unlike fanfiction, filk will often be sung aloud, which makes it harder to avoid the bad stuff when you're looking for the good.

Partially as a result of that, there are a number of artists—such as "Weird Al" Yankovic and Jonathan Coulton—whose work is frequently sung in filk circles, but who don't consider themselves filkers. Other filkers, especially ones more on the "funny and pun-filled" side, prefer the term "dementia," derived from the Dr. Demento show, which has been playing comedy and novelty music since the '70s.

The examples will therefore be divided into "Filk," where the artist considers him- or herself a filker (or dementia artist; we're keeping it simple) and part of the community; "Found Filk," where the artist isn't a filker, but the music qualifies and has probably been sung in circles; and "Somewhere in Between," where it's not so clear.

Note there's a related phenomenon in the Second World, called "minstrel song" in Russia. It's also a phenomenon of the fandom, but it's derived from the Soviet tradition of bard song (which is itself derived from the early XX century Russian urban romance music). Basically, Three Chords and the Truth about various fandoms, mostly fantasy (and among fantasy, mostly JRR Tolkien). Oh, and it almost never recycles melodies from older music.

Not to be confused with Flik of the Blue Lightning.

Examples of Filk Song include:

Filk and Filk Artists of Note

Retrieved from "https://allthetropes.org/w/index.php?title=Filk_Song&oldid=1765838"
Categories:
Cookies help us deliver our services. By using our services, you agree to our use of cookies.