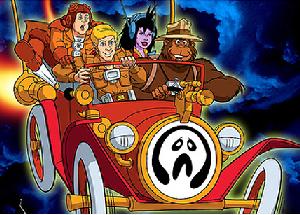 Just to set the record straight, these guys came first... sort of.

In 1975 Filmation created a series for CBS called The Ghost Busters, starring F Troop veterans Forrest Tucker and Larry Storch, as well as Bob Burns in a gorilla suit (yeah, this show was kind of odd). For this low-budget live-action series, Forrest Tucker, Larry Storch and Bob Burns played Jake Kong, Eddie Spencer and Tracy (When you hear the names "Spencer Tracy, and Kong", you'd probably think of the famous actor and a gorilla named Kong. Nope... that was Tracy) who would receive a message from a the mysterious, unseen "Zero" who would inform them that some spook or other was up to mischief, and the Ghost Busters would have to stop it. Hijinks would ensue as the Busters and the Ghosts would use every trick you could think of (and even some you wouldn't) to outwit each other. For fifteen episodes the show ran on a rather "random" style of humor and was finally laid to rest.

Cut to 1984. Columbia Pictures wanted to make a movie about a team of ghost busters which would be called, surprise surprise, Ghostbusters. The characters, setting and unique aspects of the storyline were all different, but well-into production, Columbia learned that Filmation already held a copyright of the name. After a legal hassle, Columbia was able to license the name. With the movie going on to become a massive blockbuster, they decided to cash-in with an animated series. At the time, Filmation was an animation powerhouse thanks to their successful He-Man and the Masters of the Universe and She Ra Princess of Power cartoons. They were very close to striking a deal to work with Columbia on the project, but when that didn't pan out, they thought they could cash-in with their own show.

So we got the animated Ghostbusters. A sequel to the live-action series, this starred the sons of Jake Kong and Eddie Spencer (who have the same names as their fathers). Tracy is back too, though he neither looks nor acts anything like his live-action counterpart. Nevertheless, dialogue indicates that this is the same gorilla.

The new series followed the premise of its forebearer and had the same style of humor, but there were significant alterations: the setting had changed--the Ghostbusters now worked out of "Ghost Command" in which they kept some ghosts as pets, had technology that verged on the blatantly magical such as a talking car that could fly through space and travel through time, and even a backdoor to some sort of alternate dimension, which they went into in every episode to "get into uniform." The biggest change, though, was that they now had a nemesis, a sort of ghost-robot thing named Prime Evil, who operated out of "Hauntquarters"--an elongated house situated at the end of time or something--and commanded a legion of Toyetic baddies. The mysterious "Zero" from the 1975 series was never mentioned; instead usually the GBs would either be contacted by someone (usually their reporter friend Jessica Wray) or else just realize something is up and take initiative.

Like its forebearer, Ghostbusters animated only lasted one season. This time, the cause for failure was more clear: kids tuned in thinking that this was the show with the Proton Packs and the PKE meter, and it wasn't (that was The Real Ghostbusters). That, and Ghostbusters runs on a "random" style of humor, which isn't to everyone's tastes. Some people also didn't like how Aesop-heavy the cartoon was.

Even so, there is a small following of people who love this series, and even consider it "the True Ghostbusters." You can find a haunt for such people here.

Both the live-action series and the cartoon are available in their entirety on DVD. In addition, the show currently runs on Qubo.

Tropes used in Filmation's Ghostbusters include:

Tropes common to both series include:

Tropes particular to the animated series include:

Retrieved from "https://allthetropes.org/w/index.php?title=Filmation%27s_Ghostbusters&oldid=1729766"
Categories:
Cookies help us deliver our services. By using our services, you agree to our use of cookies.