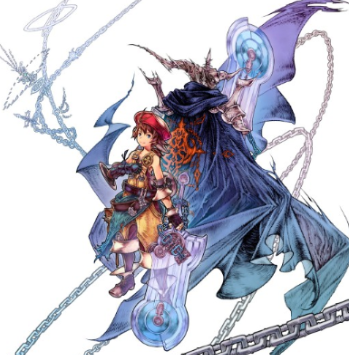 Fully called Final Fantasy Tactics A2: Grimoire of the Rift, it is yet another escapist fantasy in the eye-gougingly popular Final Fantasy RPG series.

The Kid Hero Luso was transported to Another Dimension called Ivalice. It follows the plot of Final Fantasy Tactics Advance loosely, though some reviewers are upset that it doesn't explore characterization or ramifications of plot. For example, the game is also possibly a sequel to Final Fantasy XII, and the main character cameos in PSP remake Final Fantasy Tactics: War Of The Lions. The implications of this are staggering, but the plot seems to be having too much fun to care (luckily, this is one instance where "A Wizard Did It" is a perfectly plausible explanation).

Nonetheless, the game features a host of gameplay enhancements over its predecessor. The incredibly debilitating Law system still exists, but it's a lot less restrictive. The Judge no longer takes his own turn, so he never has to interrupt the action. Moreover, the punishment for breaking the law isn't so much a negative as it is a loss of benefits: you lose your bonus "Clan Privilege" (anything from boosted combat stats to the ability to see traps on the field), the right to revive your own fallen units and a few bonus items that you receive after the match. In other words, not quite as big a deal... usually.

The game also fixed several Game Breakers that existed in Final Fantasy Tactics Advance. Accuracy is no longer the main tool used to balance abilities, standard attack accuracy is 99%, and the direction that you attack from instead affects the damage that you deal. Clan abilities no longer dispense items that can break the power curve of the game. Thieves can no longer strip an enemy character naked. Status effects have been toned down: for example, while the Blind status in the original game would render it impossible for a character to hit anything, in Final Fantasy Tactics A2, it reduces accuracy by 30% of the basic accuracy of the skill.

Final Fantasy Tactics A2 introduces at least two new classes for each of the five races. In addition, it brings in two brand new races, each with four Jobs of its own: the piglike warrior Seeq, imported from Final Fantasy XII, and the tough, fast dragon-girl Gria, invented just for the game. Vaan, Penelo and Al-Cid all make appearances... as recruitable semi-secret characters, no less.

Note that the name is not Final Fantasy Tactics Advance 2. Since, unlike its predecessor (which stuck on to Super Title 64 Advance), it isn't on the Game Boy Advance, the full name is indeed "A2".

Tropes used in Final Fantasy Tactics A2 include:
Retrieved from "https://allthetropes.org/w/index.php?title=Final_Fantasy_Tactics_A2&oldid=1871652"
Categories:
Cookies help us deliver our services. By using our services, you agree to our use of cookies.