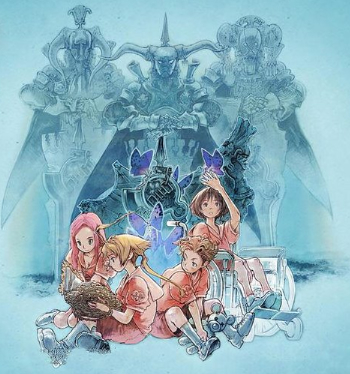 A Gaiden Game in the unfathomably popular Final Fantasy series, Final Fantasy Tactics Advance was released for the Game Boy Advance in the fall of 2003. While it inherited its RPG-flavored Turn-Based Strategy engine from its predecessor, the original Final Fantasy Tactics, its setting and plot are entirely new. With its good graphics, excellent soundtrack and staggering depth of gameplay, the game is one of the standouts of the GBA's impressive library.

The game is the first (and only) game in the series to use the Recursive Canon conceit. It begins in the tiny town of St. Ivalice, where new kid in town, Marche, meets fellow outcasts Ritz and Mewt during his first day at his new school. Together with Marche's younger brother Doned, the three of them read a mysterious book Mewt had purchased earlier and dream of adventure far away from their boring town and tedious lives.

The next day, Marche awakens to find himself in Ivalice: a strange Medieval European Fantasy world populated by creatures from the Final Fantasy series of video games of which the children are big fans. Separated from his friends, Marche catches on with a mercenary clan and takes on odd jobs while searching for a way to return home.

The children find themselves changed as well: tomboy Ritz no longer has to dye her hair to shield herself from the taunting of her friends. Marche's brother Doned, crippled and wracked with illness in the real world, has regained the ability to walk. And sensitive Emo Teen Mewt is now the prince of all Ivalice, a far cry from his Butt Monkey existence in the real world. Each of them finds life in Ivalice preferable to their real ones at first blush, and none of them are down with Marche's "return to the real world and pretend this never happened" plan... until he beats them.

Marche goes on to find himself on the wrong side of the government of Ivalice, as his attempts to return home are interpreted by the queen and her enforcer Judges as a plot to destroy Ivalice itself. Facing down persecution from the state and the very totemic beings that might be considered the gods of Ivalice on the other, Marche has to convince his friends to return home while surviving in the sometimes vicious world.

On the gameplay side, Final Fantasy Tactics Advance returns the class system of the previous game, but adds a new twist: races. Unlike in the first game, where characters could theoretically learn almost any skill, given enough time and the right gender, certain abilities and classes are available only to certain species: the brutish lizardlike Bangaa, the magical mild-mannered Nu Mou, the lithe all-female Viera, Final Fantasy series staple Moogles, and, of course, (all-male) Humans (guess what they are). Additionally, skills are learned by having certain weapons and armour equipped, instead of the Tactics's JP system.

Combat is strictly turn-based, with characters doing what you tell them to when you tell them to, no waiting for spellcasting or anything of that nature. Another new feature is "Laws", restrictions placed on combat by the Judges of Ivalice. Breaking the Law results in soccer-style penalties, with the result that a repeat offender may be hauled off to jail.

Character Development and atmosphere are only side aspects and not quite as deep and immersive as in the first game, but the number of potential missions is simply staggering, and don't underestimate the addictiveness of putting a game of this type on a portable. There's more than 200 hours of gameplay here, if you seek it.

Final Fantasy Tactics Advance swung as far to the easy side of the gameplay difficulty scale and the original Final Fantasy Tactics swung to the hard side. There's very little challenge, but the game is still solid and fans of Turn-Based Strategy games may wish to try it out. Although the Lighter and Softer graphics style caught some considerable flak from fans of Final Fantasy Tactics and Vagrant Story, the game's style is actually lifted wholesale from an earlier Yasumi Matsuno title, Tactics Ogre: which Final Fantasy Tactics was the Darker and Edgier Spiritual Successor to.

This game was also built an Audio Adaptation, named Final Fantasy Tactics Advance Radio Edition. It's exclusively in Japan, and since they're probably rare now, try watching this to fullify your satisfaction.

A sequel (Final Fantasy Tactics A2: Grimoire of the Rift) is out, and while it too is a bit of a Non-Linear Sequel, there are quite a few continuity nods that suggest that the protagonist, Luso Clemens, is from the same world as the characters in Final Fantasy Tactics Advance, even if the world he finds himself spirited to is quite different from the one in this game. Its ending proves that Marche did not destroy the Ivalice from this game when he left, and that Mewt, at least, turned out just fine. However, Word of God contradicts this (see YMMV).

The Character Sheet can be found here.

NOTE: This is for logging tropes, not lecturing on the common Alternate Character Interpretation. Canon is canon, no matter how little sense it makes.

Its Audio Adaptation Final Fantasy Tactics Advance Radio Edition has the same Tropes as above (except for the tropes on gameplay) with these addition Tropes:

Retrieved from "https://allthetropes.org/w/index.php?title=Final_Fantasy_Tactics_Advance&oldid=1871651"
Categories:
Cookies help us deliver our services. By using our services, you agree to our use of cookies.