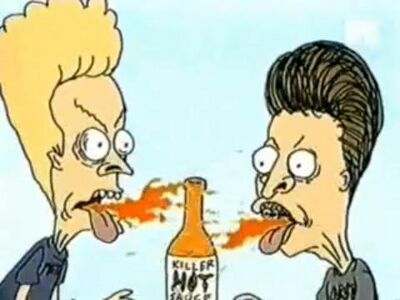 Excessively spicy food invariably results in a (usually metaphorical) blast of flame from the mouth of the diner, often after he or she has quickly turned red from feet to top of head (in the manner of a rising thermometer, sometimes with a distinctive rising "boooOOOP!" or whistling kettle sound effect).

A common subversion is if one character in a cartoon tries to pull this off on another as a joke or part of an Escalating War. The intended victim will always have an insanely high resistance, while the perpetrator, trying it himself in disbelief, will feel the full force of the trope from the tiniest bite.

Can also be the result of consuming a Gargle Blaster or Blazing Inferno Hellfire Sauce (or anything cooked by a Lethal Chef). See also Oven Logic and I Ate What?.

Nearly Truth in Television: the third hottest pepper in the world is the Naga Viper pepper, coming in at a mouth-scorching, sweat-inducing 1,382,118 Scoville Heat Units (for comparison, the Jalapeño ranks 2,500-8,000). It has been trounced in March 2011 by the Trinidad Scorpion Butch T chili, which clocks in at 1,463,700 SHU; and in February 2012 by the Trinidad Moruga Scorpion, which measures 2,009,231 SHU. Hot sauces made from any three of the peppers (or even all of them) have to be stored in glass, because they all corrode plastic like (*click!*) that.

Not to be confused with the Unsatisfiable Customer, for whom the fire breathing is verbal, rather than metaphorical or literal.

Examples of Fire-Breathing Diner include:

Retrieved from "https://allthetropes.org/w/index.php?title=Fire-Breathing_Diner&oldid=1894699"
Categories:
Cookies help us deliver our services. By using our services, you agree to our use of cookies.