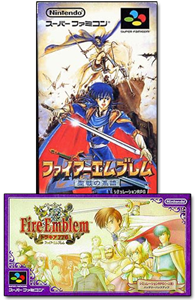 Marth and Roy, is that you?

The fourth and fifth Fire Emblem games, which constitute the second timeline and canon of the franchise. It's the only other canon with ties to another, being set in the distant past of Akaneia according to Word of God; in practice the only real tie between the two is the Divine Dragon God Naga. The two are quite the fan-favorite games among the English fanbase as a result of their radical but effective changes and differences, as well as their deeper and darker story.

There are also two prominent manga adaptations of Genealogy of the Holy War, one by Mitsuki Oosawa and one by Nuts Fujimori. Both offer rather different interpretations on the events of the game, and both contribute to filling out the backstories and characterisations of numerous characters.

Tropes used in Genealogy of Holy War include:
Tropes used in Thracia 776 include:
Retrieved from "https://allthetropes.org/w/index.php?title=Fire_Emblem_Jugdral&oldid=1687110"
Categories:
Cookies help us deliver our services. By using our services, you agree to our use of cookies.