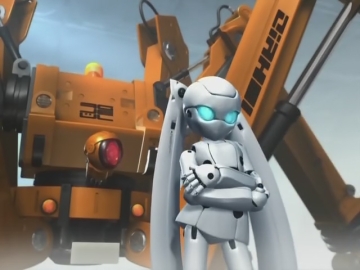 Fireball is a series of anime shorts depicting the antics of Robot Girl Drossel and her gigantic, one-eyed robotic servant Gedächtnis, who dwell in a mansion in the center of a huge robot city, somewhere in the 49th century. Later the duo is accompanied by Schadenfreude, a robotic monkey of sorts.

Drossel looks like the robotized version of a pigtailed spoiled princess and pretty much behaves that way, complete with stylized poses. The discussions she has with Gedächtnis are generally nonsensical, with lots of emphasis on speed of delivery and flights of fancy, although occasionally they become more serious in tone.

The series was produced by Toei in cooperation with Disney Studios and is notable for the usage of pure 3D imagery, in contrast with other anime where this is often blended with cel shading or other types of animation.

A second season, subtitled Charming, aired in April 2011 as a Prequel.

Tropes used in Fireball include:
Retrieved from "https://allthetropes.org/w/index.php?title=Fireball&oldid=1694456"
Categories:
Cookies help us deliver our services. By using our services, you agree to our use of cookies.