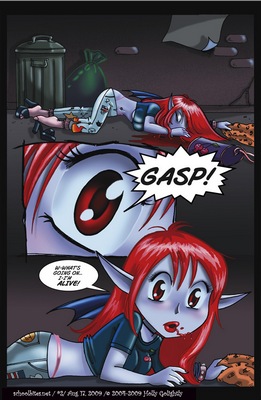 Dead, now undead. Problem solved...sorta. Did I mention this is the start of the series?

Just when the caterpillar thought its life was over, it became a butterfly.

Have you always wanted to try your hand at being The Hero but you're too boring and unskilled to have what it takes to get the job done?

Have we got a solution for you!

All you have to do is die in front of a supernatural protagonist (often of the opposite sex) by the end of the pilot episode of your series. Sacrificing yourself is a huge bonus. Chances are good that you will be resurrected in short order. Most of the time, you will be granted some form of Immortality—and, if you're lucky, you may even get other powers to go along with it.

Congratulations! Once you've experienced the horrific pain of death, the series will now focus around you and the being that resurrected you. Happy hero-ing!

Based on ancient archetypes about death and transformation; usually a hero has to go through his darkest hour to get a powerup, but in some series, they cut to this moment right away. Compare Sacrificial Lamb, Death by Origin Story.

Examples of First-Episode Resurrection include:

Kai: The Time Prophet predicted that I would be the one to destroy the Divine Order and the League of 20,000 Planets. Someday, that will happen -- but not today. As today is my day of death. The day our story begins.