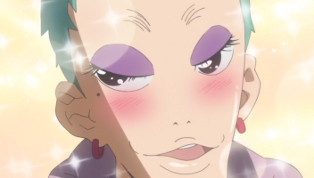 The traditional stereotypical image of a gay man. He's flamboyantly effeminate in his dress, speech, mannerisms, and interests. He wears tight (often leather) pants and a loose, blousy shirt that appears to be made for a much larger man, often with a bandana, scarf, or kerchief tied around his neck. These will all be in bright or pastel colors. Sometimes he wears extremely noticeable jewelry. He will often speak with a lisp, and is given to flouncing, prancing, and standing with one hand on his hip as the other is held out in a limp-wristed gesture. There's nothing ambiguous about THIS gay.

Extreme cases will include a near-opaque slang, referring to himself and his gay friends with female pronouns, and minor to complete transvestism. Insofar as he has a personality, it will often be vain, catty, and cowardly. Even though (compared to heterosexual men) he will rarely be shown having sex he talks about it every second of the day, when he isn't talking about clothes, the latest celebrity breakdown, or the celebrity's puppy.

The stereotype still survives because for some fraction of the gay male population, this is in fact Truth in Television. As such, this fact is greatly exaggerated by media, and this trope is made out to be more prevalent than it actually is. This can result in Unfortunate Implications, and can lead to the belief that all gay men share these traits.

Unlike Invisible to Gaydar characters, Camp Gays usually show up on television as caricatures or one-off jokes (see Monty Python's Flying Circus for a few good examples) due to the fact that they're still seen as Acceptable Targets, even among other gays.

Some professions are Always Camp, but not necessarily gay. Someone who's like this but nonetheless insists that he's not actually gay may be occupying a Transparent Closet, or he may actually be a Camp Straight.

It has been suggested that the ultimate ancestor of the Camp Gay was Oscar Wilde, whose mannerisms combined with his very public visibility defined the "obvious" homosexual for the English-speaking world at the end of the 19th century. (One wonders what would have happened if the other prominent homosexual literary figure of the period -- burly backwoodsman-styled Walt Whitman—had instead become the model for the stereotype.)

The Camp Gay can be seen as the Spear Counterpart to the Butch Lesbian stereotype (in embracing the conventional characteristics of the opposite sex). Contrast with Invisible to Gaydar, with which it usually actually overlapped before half a century ago. Compare to Macho Camp. Often overlaps with Queer People Are Funny

Examples of Camp Gay include:

Has it's own sub-trope, Gorgeous George. In rough chronological order:

This page is totally FABULOUS! Thanks for reading!

Retrieved from "https://allthetropes.org/w/index.php?title=Camp_Gay&oldid=1842163"
Categories:
Cookies help us deliver our services. By using our services, you agree to our use of cookies.