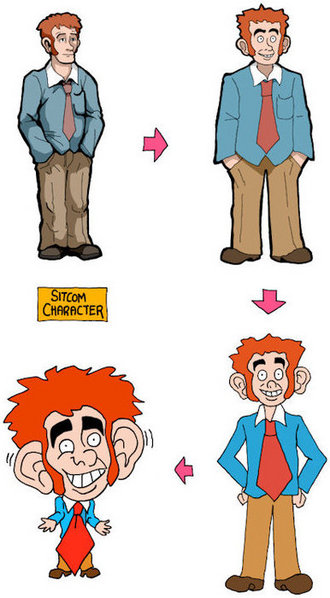 Flanderization is the process of taking a single (often minor) action or trait of a character within a work and exaggerating it more and more over time until it completely consumes the character. Most always, the trait/action becomes completely outlandish and it becomes their defining characteristic. Sitcoms and Sitcom characters are particularly susceptible to this, as are peripheral characters in shows with long runs.

Named for one of the examples in The Simpsons, Ned Flanders, who was originally just a kind and mildly religious fellow (in contrast to Homer), before becoming the obsessively pious milquetoast he is best known as today.

Note that the key to this trope is in how the process is a gradual thing, the character starts relatively normal then gains a few quirks, the quirks become more prominent and then gradually become the character. If it is simply about how the character is different early on before the writers know what to do with them, that is Characterization Marches On. Flanderization doesn't have to be a bad thing - sometimes it can be used to expand on a background character's personality when they are brought to the foreground, or make an otherwise bland character stand out more.

When Flanderization occurs as the result of adaptation from one medium to another (manga to anime, for example), it's Character Exaggeration and frequently a sign of Adaptation Decay. May sometimes be related to Lost in Imitation.

See also Never Live It Down for when the character is more associated with some action or event than the character actually changing, and Unintentionally Sympathetic, when realistic quirks are mishandled by the writers.

See also Took a Level In Dumbass, Trope Decay. Not to be confused with Stupid Sexy Flanders or the act of changing the setting and characters of a work to be in the Flemish part of Belgium. Also has nothing to do with a certain vampire girl. Planet of Hats can result from applying Flanderization to an entire population. Compare Rescued from the Scrappy Heap when this is done because the original characterization sucked, and please remember that Flanderization is not Character Development You Don't Like.

Contrast Hidden Depths. For examples specifically involving comedic aspects developing within once-serious villainous characters, see Villain Decay and Goldfish Poop Gang. If it's more of a flanderization of lifestyle than personality, it may be Corrupt the Cutie. When this makes early behavior seem odd in retrospect, that is Characterization Marches On. If a character trait from pre-Flanderization is abruptly re-introduced, it's Forgot Flanders Could Do That.

Fandom can actually do this, but it's probably best not to put this here, since that's what Draco in Leather Pants and Ron the Death Eater are for.

Examples of Flanderization are listed on these subpages:
Retrieved from "https://allthetropes.org/w/index.php?title=Flanderization&oldid=1965394"
Categories:
Cookies help us deliver our services. By using our services, you agree to our use of cookies.