Everything About Fiction You Never Wanted to Know.
(Redirected from Flashback (video game))
Jump to navigation Jump to search 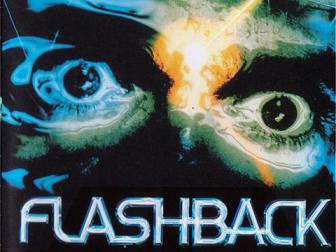 Flashback (also titled Flashback: The Quest For Identity in America) is a platform/adventure game released in 1992 on the Amiga, and later ported to the Mega Drive/Genesis and SNES in 1993. It pays homage to many classic Science Fiction films like Total Recall, Blade Runner and They Live!.

You play as Conrad Hart, a government agent. Using molecular-density scanning glasses, he discovers alien impostors among the population, known as Morphs. Attempts are made on his life, and he creates a log of his memories as a backup. Kidnapped, his memory wiped, he escapes his inattentive captors on hoverbike and is shot down over the jungles of Titan. Left for dead, he finds a holocube log of himself that instructs him to go to his contact in the city of New Washington and retrieve his memory. He must make his way back to Earth, find the Morph base of operations, and stop their plans to conquer the galaxy.

Gameplay is similar to Prince of Persia, but with a gun. You get a personal force field generator in the second level that lets you block shots- this, along with rolling, is the key to winning battles. The levels can get quite long, although checkpoints (misleadingly called Save Points) are scattered throughout.

Made by the same company that created Another World, Flashback used a similar method to create polygonal cutscenes and rotoscoped animation that could be played on an Amiga, Genesis or SNES. It billed itself as "the CD-ROM game on a cartridge/floppy", and was stuffed with cinematics, most notably when you pick up items. Later, it was ported to the CD based consoles of the era, with a replacement soundtrack and CGI cutscenes.