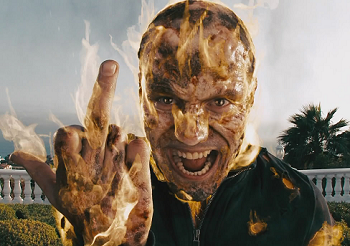 Chelios finally gets to say, "Fuck you, too." While on fire.

Flipping the Bird, or 'the Finger' as it is also known, is the act of raising one's middle finger upwards while keeping the rest of the fingers bent at the first joint or curled tight into the palm of the hand. For added expression, the participant should extend the arm to its full length and raise slightly above the shoulder line, perform this movement in a one sharp movement to add complete indignation to the gesture. For added effect, one can Dual Wield the gesture in what is sometimes called the "Double Deuce."

To flip someone off is an insult in most of the Western World, and earliest references of it go all the way to Ancient Roman writings, where it is referred to as digitus impudicus (the "impudent digit"). Often directed to those in authority in an act of defiance, Flipping The Bird is an easy way to get across complicated emotions in one motion. Also used occasionally by people who are being photographed against their will, and want to ensure the resulting image won't be publishable. Frequently used toward another driver while at the wheel.

A known British variation of the gesture is the "two fingers," where the index finger is also raised, otherwise known as "making a V-sign." Distinguished from the (inoffensive) 'victory'/'peace' "V" Sign by the palm facing inward, away from the target, much as it does for the single-finger equivalent. A popular but apocryphal story about the origin of this version of the gesture involves the 1415 Battle of Agincourt, where the French allegedly boasted they would cut off the bow-fingers of every English longbowman they captured. When the English soundly beat them, they supposedly held up their still-intact fingers at the French in defiance.

A variety of other gestures are considered obscene in various cultures around the world. Notable gestures include "the fig,"[1] which is vulgar in France, Greece, and some Near East countries, and the "okay" gesture,[2] which is obscene in Turkey and some South American countries.

Examples of Flipping the Bird include:

Retrieved from "https://allthetropes.org/w/index.php?title=Flipping_the_Bird&oldid=1952364"
Categories:
Cookies help us deliver our services. By using our services, you agree to our use of cookies.