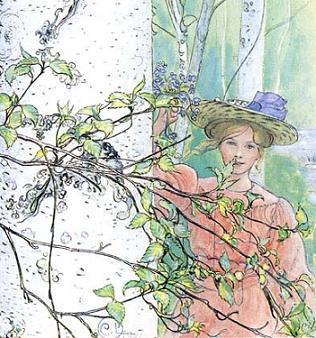 Flowers are one of the most popular Motif in literature and television alike. Whether given as a gift, or mentioned as a character's favorite plant, they're probably worth taking note of; they may well be saying something about the story's theme or someone's personality.

In the West, the popularity of flowers as motifs is probably rooted (no pun intended) in floriography - a Victorian practice where particular types of flowers meant different things. A woman rejecting a suitor might send him yellow roses; a man leaving for overseas might give his girlfriend forget-me-nots. Most people remember that red roses mean "I love you," but floriography itself has been largely forgotten. It occasionally turns up in literature, but since it takes time to explain the meanings of flowers, requiring someone to be Mr. Exposition if the flower is obscure, it's largely omitted from television and film. Additionally, gardening as a hobby has declined in modern times: many see the garden not as a place for flowers, but as an additional "room", more likely to feature a swimming pool or a swing set than a flower bed.

As a result, flower symbolism is used more generally, with "flowers" as a whole rather than specific species.

The system of hanakotoba is the Japanese system of flower symbolism -and it makes the occasional appearance in anime, especially in the form of Cherry Blossoms, white lilies, and sunflowers. More generally, Shoujo manga and anime (and related genres) will have the background break out in unexplained flowers to emphasize a character's beauty, goodness, or emotional state.

Flowers usually serve the theme of romance and relationships; a bouquet is one of the standard romantic gifts, after all. However, often this changes when the symbolism is related specifically to a character. While animals are usually around to enforce the themes of kindness/cruelty, flowers represent care/neglect. A character who lets their dog starve is cruel, while a character whose garden is full of dead plants is probably just disinterested, forgetful or careless.

A character's garden will also give the audience an impression of their personality, usually in conjunction with the state of their house or personal appearance. A garden that is extremely well kept, but with little or no flowers in it, suggests an orderly but clinical personality; a garden overgrown with weeds might suggest a cynic who doesn't see the beauty in life any more, while a disorganized but thriving garden full of flowers probably belongs to a cheerful and badly-organized owner.

Can be expressed in Floral Theme Naming.

Examples of Flower Motifs include: