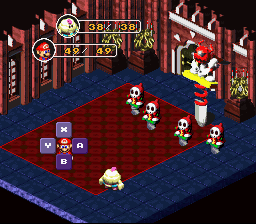 I wonder which one's the boss?

A boss that has several of its minions fight alongside it. For example, an Evil Overlord may call upon his henchmen, a queen alien monster may order its offspring to attack, a magic-based enemy will summon otherworldly creatures, a wizard will create clones of itself, and so forth.

This trope contains a wide range of variations:

In general, the best strategy seems to be to concentrate all your offensive efforts on the main boss, as killing him will defeat the minions too, and there's no sense on wasting time and ammo on the minions when they're probably just going to come back anyway. This is especially true if the boss itself has no form of attack, and its flunkies are its only form of offence. The contrary can be true if the flunkies heal the boss.

See also the overlapping trope Cognizant Limbs. Compare Dual Boss and Wolfpack Boss, where they're not flunkies, but on equal terms.

Examples of Flunky Boss include:

Retrieved from "https://allthetropes.org/w/index.php?title=Flunky_Boss&oldid=1835480"
Categories:
Cookies help us deliver our services. By using our services, you agree to our use of cookies.