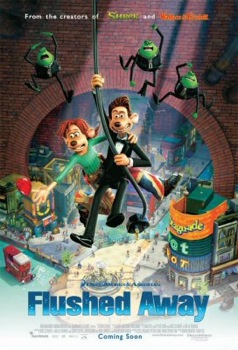 A pet mouse called Roddy St. James (voiced by Hugh Jackman), after a mishap with a sewer rat ends up flushed down from his swank Kensington home into the underworld of vermin beneath London. Desperate to get home, he encounters Rita (voiced by Kate Winslet), who is on the run from a crime lord called The Toad (voiced by Ian McKellen).

Roddy and Rita have several misunderstandings, before he finally earns her forgiveness and trust, and she agrees to take him back to the surface. By the time Roddy returns to his comfortable but rather empty life, he has realized The Toad's true plan: to destroy the rodent underworld with a flood caused by all the humans above flushing their toilets during halftime of The World Cup Final. After foiling the Toad's plan, Roddy discovers that the life in the sewer, which had originally disgusted him, was far more fulfilling than the life he'd had above.

Tropes used in Flushed Away include:

LeFrog: Okay, men! To action!
LeFrog's Men: *Raising both arms* We surrender!
LeFrog: *Annoyed* No! Not that one, you idiots! The Kung-Fu thing!
LeFrog's Men: Aaaah...

Mr. Malone: You cheeky little monkey. We Malones never go back on our word! I'll have no son of mine acting The Rat.