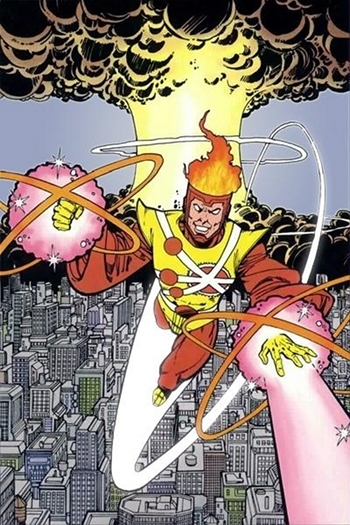 Long range and flying really fast come in handy if your powers include nuking a city.

A stock variant Combo-Platter Powers, where the powers are Flight and the ability to fling Fireballs or something. While a character is likely to have some elements of the Flying Brick and Required Secondary Powers, their primary combat style is built around flying around their opponents and shooting laser beams at them.

When fighting in a team, these characters tend to act as both a scout and transport, thanks to flight, and the guy who circles and takes shots at people. They rarely engage in slug fights if they can avoid it, but chances go up if they've got some basic Flying Brick capabilities.

This does not include having the power of flight and carrying a gun. Unless it's built in.

Abilities besides flight may include:

Examples of Flying Firepower include:

Specifically Flying and Playing with Fire

Not fire, but still flinging death from their hands