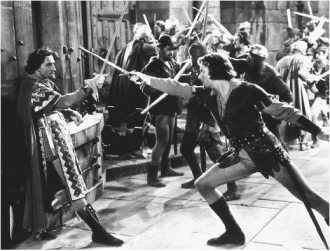 Have at thee, villain!

The classic swordplay of Swashbuckling Movies: Threaten high countered by parry high, threaten low countered by parry low, lather, rinse and repeat as you climb the spiral tower staircase, until the hero can drive his sword through the villain's heart. It looks good, and the "tink-tink-tink" of sword tips clashing has become familiar to the ear over the decades.

But Flynning isn't real swordplay. It's not even a decent simulation. Essentially, it works out to the two combatants deliberately trying to hit each others' weapons with an impressive *clang* sound, rather than each other.

The other primary variety of unrealistic fencing (more popular in the far east and modern works) is a preposterously overactive offense, typically consisting of spin and flips that would leave the back wide open combined with absurdly overshot slashes and swipes that would invite a quick lethal interruption.

It is used, on stage at least, to make sure no one actually gets hurt. It stems from live theater, where special effects are nigh well impossible and actors don't have stunt doubles. Willing Suspension of Disbelief helps; conversely, a working knowledge of any school of swordsmanship can easily ruin all enjoyment of Hollywood sword fights for the 0.0001% of the population who both know and care about such things. (It's also important to note that, on stage, if the audience sees a fight that looks too realistic, they often stop caring about the scene and begin to worry genuinely for the actors and their safety.) It's also done because real combat involving swords tended to be gory and violent, usually resulting in nasty bloody wounds and body parts being chopped off. That isn't gonna fly with the Media Watchdogs and Network Censors especially in the case of works geared toward children.

Another aspect of Flynning, seen with primarily cutting swords such as the katana, is excessively direct edge-on-edge contact. Although swords have a strong edge, they're meant for cutting through flesh, not the edge of another sword. Doing this in Real Life results in extreme damage to the weapon (just remember: Don't parry with your flat, defend by striking to your opponent's).

In theatrics, this is known as "Pirate Halves", so named because you see it so much in pirate movies ("halves", because you're basically making a half-circle with your sword with each parry, meeting at the top and bottom of each arc—a similar move, "Pirate Fulls", is when you're making a 360° arc with each swing to meet at the bottom of each swing). Often in pirate and swashbuckling movies they wouldn't have the time (or the budget) to give everyone in the film sword fighting lessons, so they'd give some lessons to the lead actors, and tell all the extras in the background, "just do this."

Has nothing to do with Tron. Actually named for swashbuckler film star Errol Flynn. Worth noting that, as some of the examples below illustrate, quite a number of his colleagues in early 20th century Hollywood actually were expert fencers, but rather than go for realistic fights they used their knowledge to produce something that just looks cool instead.

While, as copiously noted above, Flynning doesn't have much in common with real fencing except for using swords, stage combat is an art form in and of itself that is a) tremendously fun and b) tremendously fun to watch. Certified specialists can get up to absurdly high levels of skill, with enough acrobatics to make a gymnastics team jealous.

Compare A-Team Firing, which replaces the swords for bullets. Contrast Single-Stroke Battle, which doesn't look elaborate enough. See also Anachronism Stew as swords and sword fighting techniques shown on film tend to be hundreds of years ahead of what would have been available in the time setting of a medieval film[1]

Examples of Flynning include:

Retrieved from "https://allthetropes.org/w/index.php?title=Flynning&oldid=1852291"
Categories:
Cookies help us deliver our services. By using our services, you agree to our use of cookies.