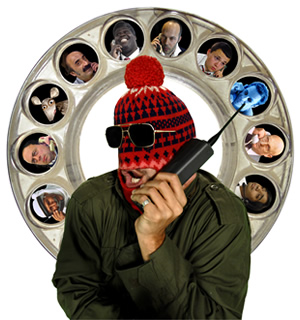 Fonejack/ v. 1. to seize control of a telephone conversation by farce esp. to divert it from reason and logic

Fonejacker is a BAFTA award-winning British comedy programme broadcast on Channel 4 featuring a series of prank calls involving a number of different characters performed by Kayvan Novak. It first appeared in May 2006, although it did not become a full series until 2007.

The show is based around a Mysterious Malevolent Masked Man known only as the Fonejacker, and the numerous prank calls he makes, under the guise of various characters in attempts to confuse or annoy unsuspecting members of the public.

The show recently[when?] entered its third series, but retitled "Facejacker" and with a different format: instead of making prank calls The Fonejacker adopts various disguises, in a similar manner to Da Ali G Show.