Everything About Fiction You Never Wanted to Know.
Jump to navigation Jump to search
/wiki/Foo Fighterscreator 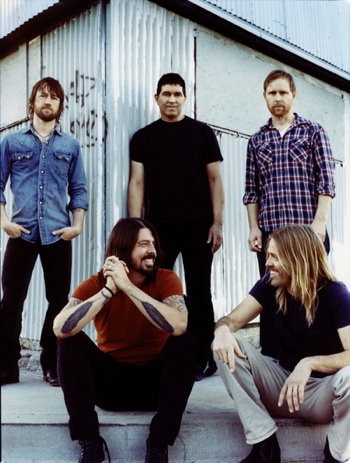 Foo Fighters is an alternative rock band, which was formed by Nirvana drummer Dave Grohl after Kurt Cobain's suicide. The band currently comprises Grohl on vocals and rhythm guitar, Chris Shiflett on lead guitar and backing vocals, Pat Smear on second lead guitar, Nate Mendel on bass, and Taylor Hawkins on drums and backing vocals. The name is a reference to a term for unidentified flying objects sighted by pilots during World War II[1].

Foo Fighters was originally a one-man project started by Dave Grohl after the dissolution of Nirvana (though he had written and recorded future Foo Fighters songs while still in the band), and he plays all the instruments on almost every song on the first, self-titled Foo Fighters album. At first, Grohl hid behind the Foo Fighters name, preferring that people judge the album on its own merits rather than on Grohl's name or the fans' desire to fill the vacuum left by Nirvana. Eddie Vedder played a few songs on his radio show, and the positive response motivated Grohl to move forward.

Grohl decided to draft in a full band for live shows and for the second album, The Colour and the Shape. Bassist Nate Mendel and drummer William Goldsmith came from cultly admired Emo trope codifiers Sunny Day Real Estate, while Pat Smear, a member of the Germs and the fourth member of Nirvana for its last few years, played guitar. Goldsmith left after the album was recorded, as Grohl had replaced most of Goldsmith's drums tracks with his own. Smear left shortly after the album was released. Replacements were found in Taylor Hawkins on drums and Franz Stahl in place of Smear (who was himself replaced by Chris Shifflet after the release of their third album, There Is Nothing Left to Lose).

The band has been praised highly by critics, stepping out of the shadow of Nirvana to become one of the most influential alternative rock bands of recent years. To date, all of their albums have been nominated for the "Best Rock Album" Grammy, with four of them actually winning. However, some critics believe that their mainstream popularity and many radio hits mean that Dave Grohl has been "selling out" Kurt Cobain's legacy.

The band's new album Wasting Light was released in April 2011. It was produced by Butch Vig of Nevermind fame, and features Pat Smear back as a full member of the band.

Not to be confused with Foo Fu.

Discography:
Foo Fighters provides examples of the following tropes:
Retrieved from "https://allthetropes.org/w/index.php?title=Foo_Fighters&oldid=1942827"
Categories:
Cookies help us deliver our services. By using our services, you agree to our use of cookies.