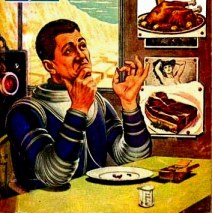 Food is different in the future and on alien planets. It might be more exotic, but for some reason, it's mostly just more convenient. Whether it's the tastiest, most satisfying meal that you've ever had, or just the futuristic equivalent of combat rations, it will come in pills—Food Pills! Food Pills typically come in your choice of several "perfectly convincing" flavors, have no sell-by date, and provide all the nutrition you need.

Food Pills were de rigeur for the Kitchen Of The Future during the first few decades of science fiction, but today they're a Forgotten Trope—though a character ranting about how the future has not delivered the wonders we expected from it will probably mention the lack of these as an example.

The change is no doubt due to the growth of the health-and-exercise industry and the subsequent general awareness that the human body needs considerably more than just a few milligrams of vitamins per day, and some of what it needs (for instance, protein and soluble fiber) has a certain minimum mass and can't be compressed into a tiny capsule.

It may also be related to the reason that we need a health-and-exercise industry. We in the modern era get pleasure from the act of eating, and know it. Even if food pills could remove the need to get nourishment the old-fashioned way, they cannot remove the desire to eat. Even if food pills could taste just like the real thing, we want more than just taste from our food. Even with incentive, no one is going to invent the "extra-crispy fried chicken" pill; crispiness and pills don't mix.

Today's science fiction food tends to be... well, food. If there is concentrated food—such as the "protein pastes" that may be Food Pills' spiritual descendants—it tends to not taste very good, ranging from bland at best to terrible at worst. See Future Food Is Artificial.

Contrast the related trope "Instant Mass, Just Add Water" Pills where pills or powders have water added to them to make glorious feasts. They both seem to come from futuristic depictions of food.

Examples of Food Pills include:

Retrieved from "https://allthetropes.org/w/index.php?title=Food_Pills&oldid=1765866"
Categories:
Cookies help us deliver our services. By using our services, you agree to our use of cookies.