Everything About Fiction You Never Wanted to Know.
(Redirected from For the Lulz)
Jump to navigation Jump to search 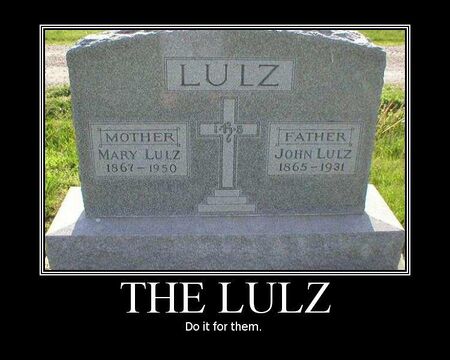 This is the motivation of an amoral character seeking... well, amusement. It's not that they enjoy being good or evil—they may not know or care about the difference—but they do whatever they feel like without regard for others. They don't need a motivation or justification for doing anything beyond the amusement of the act itself. As a result they almost inevitably do things that are dickish, maybe even cruel, but generally not outright evil. This same character will lead you into a trap, fight you to the death... and then stop on the brink of killing you to laugh and say "Are you all right?" They won't kill the hero, because they find their attempts to save the day amusing, or are intrigued by the sheer selflessness of their thinking. They may help the hero, they may help the villain, they may do both at once or screw over both at once. They are rarely if ever a driving force behind a story, but they nonetheless play a significant role. And why do they do all this? Why do they switch sides so often? Why are they working below the Big Bad when they're just as powerful and intelligent as he is, if not more? Why did they make out with the hero of the same gender?

Because it was fun. They'd do just about anything for a lark, really.

Please note, this is different from For the Evulz. While a character who does commits evil acts For the Evulz does it because they enjoy being evil, if this character does evil things it is only because they shatter the boredom of everyday life—they're not out to hurt anyone per se, but they don't care (much) if they do. Just how much they care about collateral damage and hurting innocent people (if at all) varies. They usually believe that Victory Is Boring, and if they're a Punch Clock Hero or a Punch Clock Villain, they're in it primarily for the entertainment value. One of the few ways to really make an It Amused Me character take things seriously is to kill off one of their "playthings".

Often such a character will be the Wild Card, an Enigmatic Minion, or Chaotic Neutral. A common saying of the Trickster Archetype character, the Eccentric Millionaire, the Great Gazoo, and the Screwy Squirrel. But be wary of the character devolving into Chaotic Stupid.

As you may have noticed, the line dividing For the Evulz and It Amused Me is something of an academic distinction. It is often hard to tell from a single act whether a character enjoys evil actions solely for the amusement value of the acts (It Amused Me) or whether they also/mostly enjoy the thrill of acting evilly (For the Evulz). Generally, a character who truly does things For the Evulz will do things that aren't fun or interesting in the name of evil, which they seek at every opportunity—a character who does things because It Amused Them wouldn't bother because if it's not fun or interesting, why do it? It Amused Me—motivated characters are not necessarily without a sense of morality, as they have been known to minimize the collateral damage of their schemes, for example, or even to stop what they're doing if they think they're harming the 'wrong' person or people. Someone motivated by For the Evulz would never do this, unless it hindered their ability to commit further acts of evil -- and sometimes not even then.

Examples of It Amused Me include:

Retrieved from "https://allthetropes.org/w/index.php?title=It_Amused_Me&oldid=1945513"
Categories:
Cookies help us deliver our services. By using our services, you agree to our use of cookies.