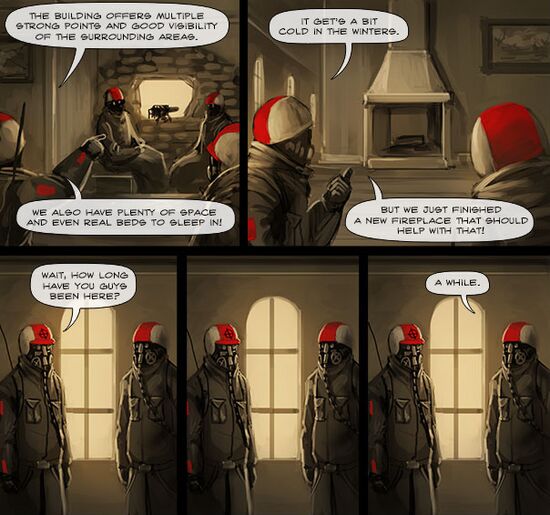 They're re-doing the kitchen next, once they decide between traditional and contemporary.

Two factions are fighting over... something. The original reason has either been completely forgotten or reduced to a historical footnote. They've been fighting for so long that no one can remember anything except the war. Sometimes, both sides will have an infinite supply of troops via some Applied Phlebotinum.

There are numerous reasons to have a Forever War, but in all cases the two sides cannot reconcile their differences for some reason. One side may exist simply to fight the other but despite their best efforts their foes remain indomitable. Perhaps one group simply enjoys fighting so much that they don't want to stop, or maybe there are political or economic advantages to constant warfare. Though the most common reason would be that the two factions had a reason to fight long ago and at this point the concept of peace is simply foreign to their culture.

If by some miracle one side does manage to win it usually isn't portrayed as a good thing. Questions like "And Then What?" might come up—they've become so used to war that they don't know what they will do now that there is no longer someone to fight.

May overlap with Hopeless War. For the science fiction novel which is not the trope namer, see The Forever War. Contrast Curb Stomp Battle.

Examples of Forever War include: