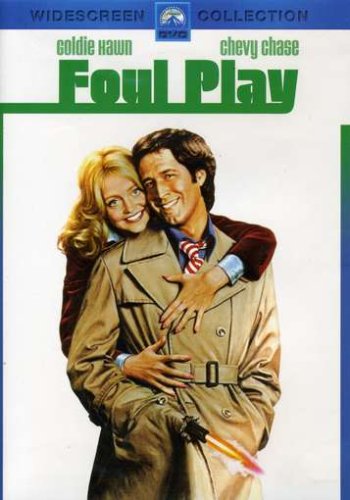 Hawn is Gloria, a shy divorcee and librarian who one day decides to follow a friend's advice to throw caution to the wind, asking out a stranger whom she helps out when his car breaks down. When they meet at the movies that night, however, he's been shot, and manages to blurt out a cryptic warning -- "beware of the dwarf!" -- before dying; when she goes to get help, however, someone has taken the body before she can get back to her seat. Suddenly embroiled in a lethal conspiracy, Gloria finds herself being hunted by various parties who are eager to find out what she knows and make sure she doesn't tell anyone else. Various complications -- including diminutive salesmen, albino assassins, a lecherous conductor (Dudley Moore) and Detective Tony Carlson (Chase), a handsome police officer assigned to investigate her increasingly bizarre story -- ensue.

Stanley: Binoculars? Are you into that as well?! I read about it in Penthouse magazine!