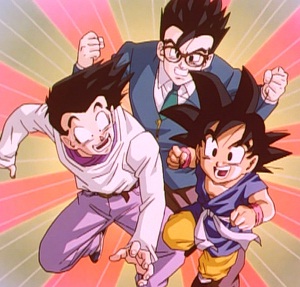 See that kid? He's their dad.

Some form of Applied Phlebotinum results in one or more main characters regressing to an earlier age. It may be the result of a freak accident, a plot on the part of the bad guys to incapacitate our heroes, or done on purpose so the characters can relive their childhood (at least temporarily).

For some reason this plot is often used in Fanfic, where it's called a De-Aging story.

When someone dies in their rejuvenated state, expect them to turn back old immediately.

When a Fountain of Youth effect doesn't get reversed and a younger actor replaces the older one in the cast for good, it's also an example of The Nth Doctor.

It's common for characters to overdo it in stories involving this trope, often winding up as children, babies, or possibly even regressing out of existence entirely. This may or may not be permanent, but if the character in question was a bad guy, expect it to be permanent - well, at least, until they grow back up the old-fashioned way.

Examples of Fountain of Youth include:

Retrieved from "https://allthetropes.org/w/index.php?title=Fountain_of_Youth&oldid=1899589"
Categories:
Cookies help us deliver our services. By using our services, you agree to our use of cookies.