Four Weddings and a Funeral 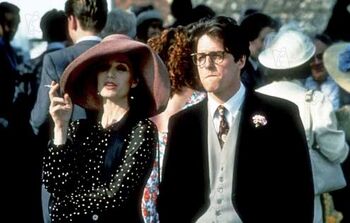 Four Weddings and a Funeral is a British comedy directed by Mike Newell and released in 1994. It provided Hugh Grant with his breakthrough role.

Charles is a charming but gaffe-prone thirtysomething whose friends are getting married one after the other, with him as the most likely candidate to be best man. He has come to find attending weddings unbearably tedious, and he himself remains single (or, as an ex-girlfriend of his puts it, a "serial monogamist"). One day, at yet another wedding, he meets Carrie (Andie MacDowell), and he has a one-night stand with her.

When he meets her again at another wedding, he begins to think she might be the right one. Unfortunately, she's now engaged to someone else...

Tropes used in Four Weddings and a Funeral include:
Retrieved from "https://allthetropes.org/w/index.php?title=Four_Weddings_and_a_Funeral&oldid=1829663"
Categories: