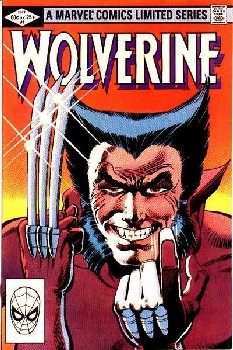 Do you want to fight?

Wolverine's first solo adventure was written in 1982 by Chris Claremont and Frank Miller. It was named simply "Wolverine", as the character. It is a limited series of 4 issues, with an adventure of Wolverine in Japan, continued in Uncanny X-Men 172 and 173, where the rest of the team joins the adventure.

In earlier X-Men issues, Wolverine had met Mariko Yashida, a Japanese woman, from the powerful Yashida family. They had a romance, and now Wolverine goes to Japan for her. He met an old friend, the agent Asano Kimura, who informed him that Mariko was married. It was an arranged marriage, ordered by Mariko's father, Lord Shingen. Her husband was violent with her, but she refused Wolverine's help: it was a duty of family honor. Shingen captured Wolverine and defied him to a duel for Mariko. Wolverine lost, and was taken out of the mansion.

When he woke up in the street, he was attacked by The Hand, and rescued by the ronin Yukio. Yukio fell in love with Wolverine, but he still wanted Mariko. Even worse, she was an agent of Shingen, instructed to seduce Wolverine, but she fell in love with him for real. Considering that he was done with Wolverine, he arranged a meeting with Katsuyori, head of a rival cartel, and ordered Yukio to kill him. She told Wolverine that Katsuyori was who sent The Hand against them, and they follow them to a Kabuki play. Katsuyori expected one of the actors to jump from the stage and attack Mariko and Shingen, but Wolverine intervened and saved them. But in the fight, Mariko saw Wolverine's savage fury for the first time, and left horrified.

Yukio left Wolverine when he calls her "Mariko" while being drunk. He follows her to ask for forgiving, but finds Asano killed in his apartment, by one of Yukio's daggers. And by a smell, he finds out that she was working for Shingen all the time. He chased her, and they were both attacked by The Hand. Wolverine decided to take down the criminal empire of Shingen, and Yukio attempted to redeem herself by killing him. But she was captured and defeated in a duel with him. But she redeemed herself in another way: she killed Mariko's husband when he was about to kill her. For Wolverine, it was a tie, so he let her leave. He had a second duel with Shingen, and killed him. He thought that Mariko would have to swore vengeance against him for that, and that the only options were to kill her or to let her kill him... but no. Mariko thought that Shingen had brought dishonor to the Yashida family, so she should kill him, and then suicide to regain such honor, but Wolverine's duel allowed her to escape that destiny. And so, they organized their wedding.

The X-Men were invited to the wedding, including their recent incorporation, Rogue. Wolverine still hated her for her fight with Carol Danvers when she absorbed her memories and powers. But things had not ended yet, and the criminal ties laid by Shingen were not very easy to break. The Silver Samurai requested an interview with Mariko, and she accepted, refusing any help from the X-Men. Still, she has to take it, when they are attacked. Mariko, Yukio and Storm defeated the Silver Samurai, and Wolverine and Rogue joined the fight in the hospital. Everything was going to end well... but Mariko stopped the wedding, and rejected Wolverine because he was not worthy. It was revealed in later issues that she was under Mastermind's control when she rejected him, but refused to get married with Wolverine until she could clean her family from criminal links.