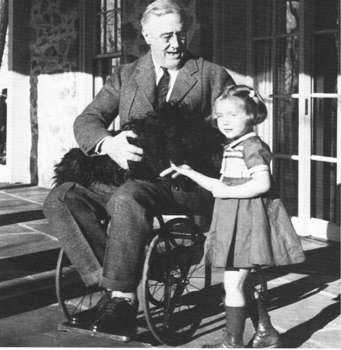 Franklin Delano Roosevelt (1882-1945) was the longest serving President in US History, serving three full terms and starting his fourth when he died. No other President had even won a third term (a couple had tried — Grant and T.R. — but none were elected). And, thanks to the 22nd Amendment, no President since will be able to challenge his length of service (barring the very unlikely event of the 22nd being repealed).

Actually spent much of his life paralyzed from the waist down due to polio, including his Presidency, making him America's one and only handicapped President, unless one also counts Kennedy who had Addison's Disease. There was less scrutiny of public figures back then, which he combined with trick photography, leg braces that let him stand and walk short distances by swiveling, immense upper-body strength to hold himself up with the podium and other tactics to ease the public away from questioning why he was never pictured standing up on his own. (He was almost always leaning on somebody or something in the photos that show him standing.)

Famous for the New Deal, World War II and the "fireside chats". The last of these were thirty radio speeches, where he addressed the public directly and are an early example of what political analysts call "going public". They were more popular than every other show. His "New Deal" was put into action with the intent of saving the country from the Great Depression and possible revolution. Whether it had any effect, and whether this effect was positive, is still hotly debated. Even some in his own administration disagreed on it being effective including his treasury secretary Morgenthau and first vice president Garner. One component that absolutely didn't have a positive effect was the Agricultural Adjustment Act, which placed a limit on food production in a failed attempt to raise prices on crops by reducing supply, right before the dust bowl kicked in.

Furthermore, the worst thing he did in office was authorizing the internment of Japanese-Americans during WWII; tens of thousands of American citizens were rounded up and put in prison camps solely for being of Japanese descent. Owch.

He was also something of a Magnificent Bastard. Recognizing the danger and evil Hitler represented, he bent, folded and spindled assorted laws and roadblocks preventing overt US assistance to the Allies in order to provide as much support as he could against significant political and popular opposition, in spite of making campaign promises to keep America out of the war. Then the attack on Pearl Harbor removed any significant opposition to joining the war, while Adolf Hitler was obliging enough to declare war on the USA shortly there after and remove any real objections to fighting the Nazis taking top priority. His supermajority in Congress and his emergency powers enabled him to run the USA almost like a monarch. The length of his presidency also ensured control over the courts and by the end of his life only one member of the Supreme Court, Owen Roberts, was not nominated by him (Roberts would resign within a few months of Truman taking office). The rulings of his judges on his policies include several extremely controversial cases, such as Wickard v. Filburn, United States v. Miller and most infamously Korematsu v. United States. These are made even more controversial by one appointee, Hugo Black, holding a solid gold passport that was proof of his life membership in the Ku Klux Klan.

He's known for the line "the only thing we have to fear is fear itself."[1] Remember, he's one of two presidents to have this last name.

Before he was President, he was Assistant Secretary of the Navy during World War I. The sole thing he did here that he's remembered for (except possibly accusations he was responsible for the lax defense of Pearl Harbor) during this position occurred after the war. In 1919 he ran an entrapment campaign to locate and persecute sailors who engaged in homosexual acts during leave, using Americans sailors he ordered into these acts as bait. His actions in what would be called the Newport Scandal got him censured by Congress.

His wife Eleanor Roosevelt (a fifth cousin) was the first First Lady to actually take an open role in government (Woodrow Wilson's wife did in secret when he had a stroke). She became hated by many, an experience she would share with several of her successors, including Nancy Reagan, Hillary Clinton, and Michelle Obama. She was viciously insulted as being ugly.

The Roosevelts had a complex relationship. After she first learned Franklin cheated on her with her secretary, Lucy Mercer, Eleanor offered him a divorce, but Franklin declined--both for the sake of his political career and because his mother (who had something of a rivalry with Eleanor) threatened to disinherit him if he did. They never shared a bedroom after that, but their working relationship was respectful, for the time. As Franklin's polio prevented him from traveling, Eleanor became his eyes and ears, and a great political tool. When disgruntled veterans marched on Washington during Hoover's administration, wanting their pensions early because of the Depression, it was noted that Hoover sent the army to drive them away, while FDR sent his wife to give them charitable goods.

He died of a stroke before the end of the Second World War, resulting in Harry Truman becoming President.

The Republican-controlled Congress changed the Constitution after he left, so no one else can serve for more than eight years (or up to ten if they take over for less than two years of another president's term). This turned out, ironically, to primarily affect Republicans: only one Democratic president (Bill Clinton) and three Republicans (Dwight D. Eisenhower, Ronald Reagan, and George W. Bush) so far have actually served long enough to be affected by the term limit. (Sitting President Harry S. Truman was grandfathered in by the amendment; Lyndon B. Johnson served less than two years of John F. Kennedy's term and could have run for one more term. Both of them chose not to run again for political and personal reasons.)

He's consistently ranked by scholars and the public as one of the greatest Presidents in American history, next to George Washington and Abraham Lincoln while among libertarians and some conservatives he's actually considered the worst for his dramatic expansion of government and human rights abuse.

Retrieved from "https://allthetropes.org/w/index.php?title=Franklin_D._Roosevelt&oldid=1948051"
Categories:
Cookies help us deliver our services. By using our services, you agree to our use of cookies.