Everything About Fiction You Never Wanted to Know.
(Redirected from Freak Angels)
Jump to navigation Jump to search 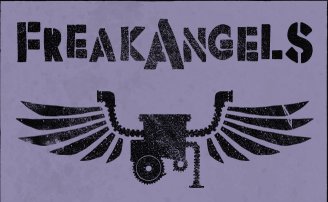 23 years ago, twelve strange children were born in England at exactly the same moment. 6 years ago, the world ended. This is the story of what happened next.

Set six years after apocalyptic flooding destroys modern civilization (at least in Great Britain), the story follows the self-styled "FreakAngels" - a dozen 23-year-olds born at the exact same moment, all with purple eyes, pale skin and an array of mental powers that include telekinesis, telepathy, mind control, and unique individual gifts.

The comic is set in the London district of Whitechapel, now flooded with a good 20 feet of water, and populated by refugees. The FreakAngels are essentially in charge. They're responsible for the steam-powered machines that purify water, the scavenging of artifacts from the pre-flood days, defense against raiders from other neighborhoods, and general enforcement of order. But the raids are getting bolder, the population of Whitechapel is growing too large for their jury-rigged equipment to feed, and the exiled twelfth FreakAngel is looking for revenge on his old family.

Ellis and Duffield turned out six full-color pages a week; it ended at 144 episodes (six volumes of the paper edition) on August 5, 2011. It can be seen here.

Tropes used in FreakAngels include:

KK: - fucking torture chamber, Kait!
Karl: You can read fucking minds, Kait, so why are you operating the Whitechapel wing of Abu Fucking Ghraib over there -
Arkady: It smells of poo!

Arkady: Do you know what that was, Luke? That was exactly one second of my overdose experience when we were fifteen. If you ever do something like this again, I am going to give you five minutes of that.

Karl: If you think I'm kissing you in front of this shower of bastards you're fucking insane.

Kait: I fucking loved Quincy. In fact, I would have done Quincy, so less of your lip.
Miki: You would have...
Kait: He was a crimefighting genius and he always had hot young chicks on his boat. Quincy's cock was a foot long.