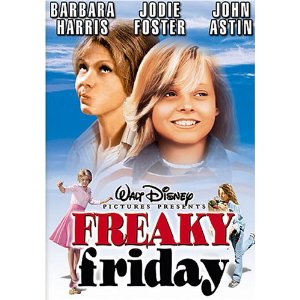 Freaky Friday, based on a novel by Mary Rodgers, is a Disney movie starring Jodie Foster as a teenage girl, Annabel, who does not get along with her mother, Ellen, to say the least. One Friday the 13th (hence the title), they wish to switch places for one day, causing them to magically trade bodies. Hilarity Ensues, including the now-young mother lusting after her daughter's boyfriend. It eventually transpires that they had subconsciously switched bodies in order to learn An Aesop about the value of family and friendship.

There was also a sequel and two remakes, each less similar to the book than the last. The more famous of the remakes starred Lindsay Lohan and Jamie Lee Curtis, with a slightly different plot. The daughter and mother in that version are an aspiring guitarist named "Anna" and a widowed psychologist named "Tess," respectively, and they switch bodies after a Chinese restaurant owner's mother hands them some magic fortune cookies. Also has Mark Harmon in it, as Tess' fiance, Ryan.

Retrieved from "https://allthetropes.org/w/index.php?title=Freaky_Friday&oldid=1884542"
Categories:
Cookies help us deliver our services. By using our services, you agree to our use of cookies.