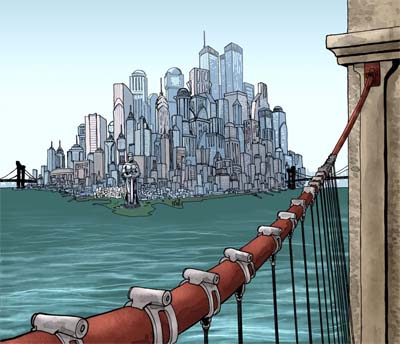 "Like a Saturday Morning Cartoon that airs on HBO."

Currently in its eighth year of operation (est. October 2007), Freedom City Play by Post is the largest and most active Mutants and Masterminds play-by-post setting on the Internet. Set in M&M's default Freedom City setting in the present day, the game has become a massive shared universe involving dozens of active, semi-active and inactive players. It's a rigorous game, one where the GMs and experienced players are unafraid to heckle Trolls and Mary Sues out of existence. Most of the staff are fans of both comics and TV Tropes, which means they expect characters to draw from the common tropes and themes of comic books.

That said, they prefer to avoid certain comic book tropes. No Stripperific costumes, please, and no crazy Iron Age vigilantes. Hero(ish) PCs only, sticking to somewhere between Silver Age, Bronze Age, and Modern Age in feel, though the Refs are open to good arguments about all sorts of characters. Characters should be basically the Good Guys, and concepts should pass tests like, "Would people buy a comic book about this character?" and "Why would anyone talk to this character?" If your character would fit as a recurring character in a DCAU series, they'll probably fit in well here.

Many of the tropes in the game can be found on the pages for the M&M game or the FC setting, but there are quite a few largely unique to FCPBP. Please note that only tropes related to active characters will be listed here.

Tropes used in Freedom City Play By Post include:

Our Monsters Are Different

Retrieved from "https://allthetropes.org/w/index.php?title=Freedom_City_Play_By_Post&oldid=1758396"
Categories:
Cookies help us deliver our services. By using our services, you agree to our use of cookies.