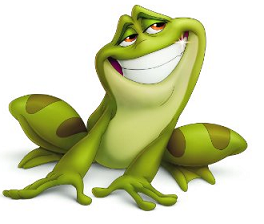 Frogs. They croak. They jump. They are cold-blooded. They are apt to lurk in the pond at a periscope depth and look at you, or sit perfectly still on the grass, melting into background and then catching an insect with one lightning-quick motion, like Cold Sniper. The pretty neon colored ones can kill you with a touch others will get you high when licked. Sometimes they just look like they know something funny, but won't tell you. Toad is a land-based variant with extra wart issues. All in all, they are rather cool animals.

They also are one of most common choices as wizards' familiars and one of stock forms for Baleful Polymorph. (naturally undone by a kiss)

See also "batrachophobia" section on Why Did It Have to Be Snakes? page. Yes, some people are afraid of them.

Examples of Frogs and Toads include:

Retrieved from "https://allthetropes.org/w/index.php?title=Frogs_and_Toads&oldid=1780840"
Categories:
Cookies help us deliver our services. By using our services, you agree to our use of cookies.