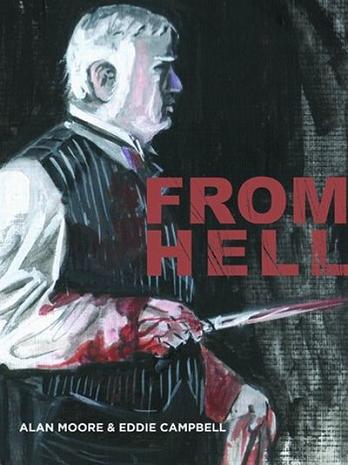 Dr. Gull, in the low rent apartment, with the Liston Knife.

From Hell is a comic book series written by Alan Moore, speculating about the identity of Jack the Ripper. The series was published in 10 volumes between 1991 and 1996, and an appendix, From Hell: The Dance of the Gull-Catchers, was published in 1998. The entire series was collected in trade paperback, published by Eddie Campbell Comics in 1999.

From Hell takes as its central premise Stephen Knight's theory that the Ripper murders were part of a conspiracy to conceal the birth of an illegitimate royal baby fathered by Prince Albert Victor, Duke of Clarence. Moore himself has written that he found Knight's theory to be rather unlikely, but felt it would make a good story.

It was adapted into a film of the same title in 2001, starring Johnny Depp as Inspector Abberline.

Tropes used in From Hell include:

The Movie contains examples of:

Retrieved from "https://allthetropes.org/w/index.php?title=From_Hell&oldid=1111869"
Categories:
Cookies help us deliver our services. By using our services, you agree to our use of cookies.