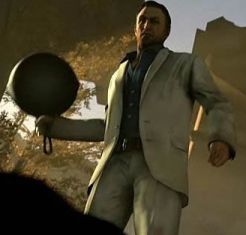 ...please tell me you're going to make breakfast with- **Spang**

Unlike many other Improbable Weapons, the frying pan could actually cause quite a bit of damage. One can assume that getting hit over the head with a slab of iron would at least cause a concussion. Indeed, the noble frying pan is a worthy melee weapon.

It should be mentioned that frying-pans-as-weapons are usually wielded by females, although the occasional chef may be found using it.

It should also be mentioned that wielding a typical cast iron skillet for any length of time, with any efficacy, would take considerable arm strength.

Just as it is in any good kitchen, this is an absolute staple of slapstick comedy. In some cases, it might also be considered the Western counterpart of the Hyperspace Mallet. May be found in the arsenal of the Chef of Iron.

See also Tap on the Head.

Examples of Frying Pan of Doom include: