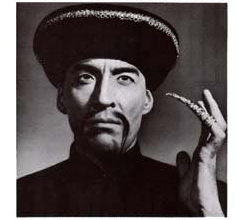 The villain of various novels by Sax Rohmer, this Diabolical Mastermind is the archetypical Yellow Peril villain. He has made his way into many genres.

Fu Manchu has a long Evil Mustache in the famous "Fu Manchu" style.[1] He has squinty eyes: pure Yellow Peril. He is a Chessmaster setting up Xanatos Roulettes, and he's as much of a Karma Houdini as the codes of production allow...

His actual public domain status is complicated. The first three Fu Manchu [2] books were published prior to 1922 and are public domain in the USA; however, some characters are not public domain since they were introduced later, particularly his daughter Fah Lo Suee, who was only named in a later book. This has caused problems for Marvel Comics, who cannot reprint Master of Kung Fu, which uses not only Fu Manchu but other characters from the series. Also, Fu Manchu is not in public domain in Europe (Rohmer died in 1959), and Alan Moore could not name him in League of Extraordinary Gentlemen.

He has been played in over forty films by over a dozen different actors, including H. Agar Lyons (an Irishman), Warner Oland (a Swede, appearing in the page image), Boris Karloff (an Englishman, with Irish-American Myrna Loy as his daughter, here called Fah Lo), Christopher Lee (an Englishman with a bit of Italian in him), and Peter Sellers (also English) -- but never yet by an actual Asian actor, although the daughter of Lee's version was played by Tsai Chin, an actual Chinese actress. In fact Sellers' take, The Fiendish Plot Of Dr. Fu Manchu (1980), is the last movie centered around the character to date, and a parody at that.

There was also a brief television series entitled The Adventures of Dr. Fu Manchu airing in 1956. The show can be considered Fair for Its Day as it contains some sympathetic, peace-loving Asian characters as well as some villainous Western characters. However, Fu Manchu is still played by a white man (Glen Gordon) in Yellowface and it contains the same over-the-top exoticism, so it can still be a little cringe-worthy. Some episodes can be viewed here.

Of course, Fu Manchu also made a notable cameo in the Grindhouse fake trailer Werewolf Women of the S.S. where he was played by none other than Nicolas Cage.

He probably bears direct responsibility for killing off an entire facial moustache style among the East Asian peoples of the world, a feat only matched by Adolf Hitler.