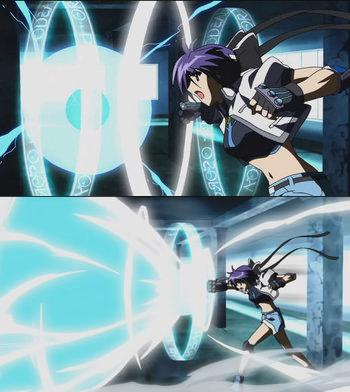 You do not want to get punched by Subaru

The traditional magic user is a Squishy Wizard: old, slow and frail, but able to kill with a glance. With a subtle wave of his hand, the wizard can conjure up the arcane power to do almost anything.

The practitioner of Full Contact Magic is not that. Oh, he can attack you from across the room, but he does it by punching the air, and then you get punched. Each spell cast is punctuated not by a subtle gesture, but a grand motion. Basically, when a wizard casts spells the way a fighter uses swords. Dodging opposing attacks or setting up on-the-spot shields is also important. If the wizard can fly, it's a whole new ball game.

Contrast with Magic Knight, where a wizard is not squishy, but simply is a trained warrior in addition to casting spells. Contrast with Supernatural Martial Arts, where the martial arts training is what creates the magical effect, rather than the magical spells themselves requiring broad motions. When a character can use both Magic and martial arts separately, it's Kung Fu Wizard.

A Sub-Trope of Magical Gesture. Compare and contrast with the less physical Pstandard Psychic Pstance.

Examples of Full-Contact Magic include: